I would like to wish you all a Merry Christmas. Although it has been quiet around here lately, I haven't abandoned the blog yet.

Santa Ssu wishes everyone a Merry Christmas as well.
Posted by Shemek hiTankolel at 12:57 3 comments:


Today is Remembrance Day, a day that marks the end of  WW1, also known as the Great War, and commemorates the sacrifice of those British and Commonwealth troops that served in this conflict. Coincidently,  today also happens to mark the 100th anniversary of the cessation of hostilities. The participants are all gone now, consigned to the pages of history texts, and yet it would seem that we are desperately in need of their conviction and courage these days. The familiar evils of tyranny, and suppression, are still very much alive and well these days. In fact some might say that they are thriving! Although we cannot say that the First World War was fought to end these patterns of behaviour, many of the participants surely felt that they were doing just this. After the guns fell silent at 11:00am  on November 11, 1918,  the Western world, so horrified at the slaughter of the previous four years, felt that this was a war so horrible that no other wars could be considered if one remembered the horror of the trenches. Sadly, how wrong they were.


Today I will spend the day with family and then, later, sitting in front of the fire, have a drink to the memory of those that served, and to those that I served with. I may even meet up with some of the lads and talk about the old days, but probably not. Lest We Forget…..


In Flanders fields the poppies blow


Between the crosses, row on row,


That mark our place; and in the sky


Scarce heard amid the guns below.


We are the Dead. Short days ago


Loved and were loved, and now we lie,


Take up our quarrel with the foe:


To you from failing hands we throw


The torch; be yours to hold it high.


If ye break faith with us who die


We shall not sleep, though poppies grow


In Flanders fields.
Posted by Shemek hiTankolel at 10:34 No comments:

Well, its been a very long time since my last post, but I'm still here. Stay tuned for more.
Posted by Shemek hiTankolel at 22:32 No comments:


I recently came across a wonderful miniatures site that sells some truly unique 28mm figures –Hydra Miniatures. Based in the US, their inspiration is derived from the pulp science fiction of the 30', 40's, and 50's, some of the same stuff that MAR Barker was inspired by when creating Tékumel. The miniatures' aesthetics would be  perfect for Tékumel games set in the Latter Times, or during the Human Spaces Empire's epoch. I plan on purchasing some of these soon, and when I do I will be sure to post a review. I have included some images taken from their website below.

They can be found here:

Is Tékumel too hard to play? 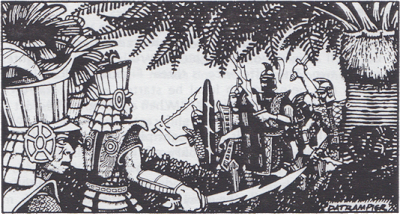 I normally don't  bother such things on this blog, but recently, on a site that I have been known to frequent, the often voiced opinion that Tékumel is not a popular, or well known setting, because it is too complex to run successfully, unless you are MAR Barker, was repeated again

Tékumel as a setting is as playable as any other commercial setting. The failure lay in the foolish notion that somehow arose, and was perpetuated by many gamers, that the only/one way to run a game using this campaign setting was to follow Phil's "Tékumel Prime game" in order for it to work. All of the later affectations regarding pronunciation, immersion, etc stem from this desire to emulate the original campaign game, even though from the get go MAR Barker asserted that this was not possible, and people should make Tékumel their own. I have never understood this attitude. The complexity of the setting is not a prerequisite to playing a Tékumel campaign, but something that needs to be gradually developed over many sessions, if that is what the DM and players want. This is the crux of the matter. Do you want an Anthropological exercise, or do you want to play make-belief, "make some shit up," and push some lead figures around? From my experience, and probably the experience of the vast majority of regular Tékumel players, including  "Chirine baKal", "Gronan of Simmerya" (aka General Korunme), Dave Arneson (aka "Captain Harchar") and MAR Barker himself, the latter is closer to so-called "real Tékumel" than the former.

I am currently running a Tékumel Campaign that is in its second year, with two of the four players in the group not having a clue what the game world was like before they sat down to play. The remaining players in the group had, at best, a passing familiarity with the milieu but certainly were not "experts." They are now, finally, "getting" Tékumel. They have absorbed the background material and, to quote the above mentioned Chirine, have "gone native." The reality is that I could have easily had the same campaign set in Greyhawk, Forgotten Realms, or my own campaign world and changed very little of the story. The complexity would have gradually developed except that you would have a faux medieval world to explore instead a fusion of Mughal, Meso-American, Egyptian and Barsoomian cultures. Both have their challenges if an immersive gaming experience is desired, but in both cases you can still enjoy yourself and not give a toss whether a name is pronounced a certain way, or someone should be greeted by a particular honorific. There is no need to understand the cultural nuances of Tsolyáni society prior to playing. I would be curious if anyone knows if such a requirement is even stated anywhere in the official literature.


The fact that many gamers feel that some type of major prep work is mandatory in order to play is too bad. They are missing out on a playing experience that is not a mere re-hash of the same Tolkienesque tripe.
Posted by Shemek hiTankolel at 12:02 1 comment:

Another year is almost past and Christmas is just over a day away. We have gotten a lot of snow and Christmas will most certainly be a white one. Although my posting has been sporadic again, this year has been a very busy and good one for gaming. My Tékumel group is going gangbusters and the guys have gotten into quite a pickle. Although we are only able to meet monthly at this time the games have been very productive for the most part. Unfortunately I’m located in the east end of the city and the rest of the group is closer to the downtown, which results in a long travel time to get to my place, even though everyone drives. I think that we will try playing on Hangouts in the New Year so that we can increase our gaming frequency.  I have been posting some of their adventures here if you are interested. http://actualplaysintekumel.blogspot.ca/ The Sons’ of the Vríddi are mine. A regular participant on the RPGSite, and someone that I consider a friend of mine, Asen G., created the blog as a venue for to share Tékumel adventures, and dispel the myth that it’s too hard to game on Tékumel. It really is worth taking a look at as there are some great session/game reports posted there.

I have been enjoying RPGs since the autumn of 1982 when I first discovered D&D. As it happened I became the DM in my first gaming group. This has largely continued up to the present with two exceptions: a campaign run by one of oldest friends, Larry, and one which is being run by my new friend Ben. The first game was in the early 90s and lasted for about a year or so, on and off, and was where my alter-ego Shemek came into being. The second game has been progress or two years and is one that I joined only a couple of months ago. Both games have one thing in common –great DMs who are evocative and can paint a vivid picture with words. Their campaign worlds are quite different but both have (had) elements of what I would call the Weird in them, others might call it creepy. I for one love this type of game world, as the Tolkienesque tropes have become, for lack of a better word, stultifying. I just can’t stomach the thought of another orc, elf, or dwarf. It was the lack of these beings that first drew me to Tékumel all those years ago, and has kept me there. Playing is a blast and has been a welcome change. If anyone is interested Ben’s game-blog may be found here: http://maziriansgarden.blogspot.ca/

More tomorrow, and if not, Santa Ssü wishes a Merry Christmas to those reading this blog.

Posted by Shemek hiTankolel at 22:20 No comments: 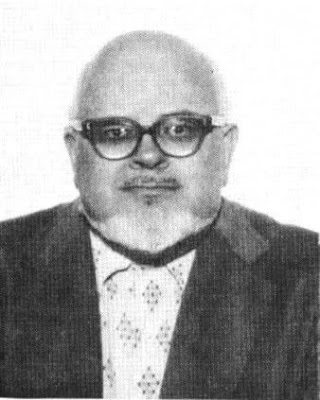 Had MAR Barker still been alive he would have turned 88 today. Although I never got the chance to game with him, I was fortunate to have enjoyed an email correspondence with Phil in the mid 90's, and interact with him on the old Blue Room site. His creation has provided my group and I countless hours of enjoyment over the years. There have been many RPG settings created over the years, but none have held my attention as thoroughly and for as lengthy a period as Tékumel. I remember the first time I was introduced to the setting. One of my closest friends in High School, Harvey, showed me the Sourcebook –Vol.1 in the hallway, in between classes, one autumn day in the mid 1980's. I been exploring the world ever since! Over the years my groups have survived the Stews of Jakalla, and fought in the underworlds of the same city, tramped over the Chaigari Protectorate, been taken as slaves, and feted as heroes. They have thwarted nefarious plots and have had comrades die in ancient caverns far below the world –alone. Tékumel has provided my group and I a little bit of everything, and has kept me coming back for more.
Recently I had the pleasure of being invited to play in an online game. Those of you who have spent any time online looking for, or at, gaming blogs have no doubt come across Ben L.'s Mazirian's Garden . A wondrous and truly inspired work, it led me to leave a comment for one of the entries, something I never do, with the exception of Chirine's blog that is. One thing led to another and I was invited by Ben to join the group. Yesterday was my first game and it was great time for me.  I can honestly say that I felt much of the same magic that I experience when gaming on Tékumel in Ben's game. The same majesty and sense of wonder is present, along with an otherworldliness that makes it easy to immerse oneself in the environment. Not surprisingly I brought in a Tsolyáni to the Dreamlands, the brave Bashán hiTankolel. A devoted follower of Mighty Chiténg, he is a Kuruthúni of the 8th Imperial Heavy Infantry, a member of the Red Mountain Clan, and a nephew of Shemék hiTankolel of Pecháni fame. His first session went well, and I look forward to the next game.
Posted by Shemek hiTankolel at 12:41 No comments:

Shemek hiTankolel
A long term resident of Pecháno, and wanderer on Tékumel. Flee you enemies of man!